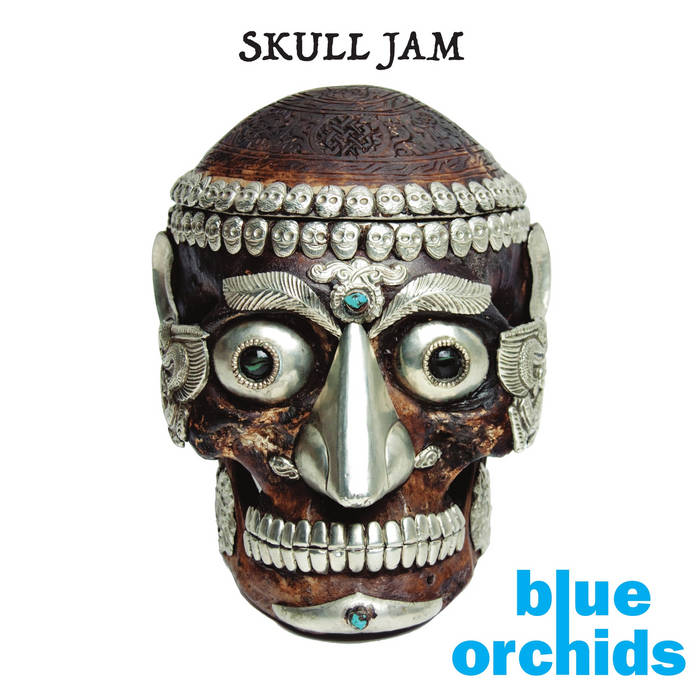 Tracks 1 and 2 were recorded at the sessions for the Blue Orchids' "The Once And Future Thing" album, originally for a 7" single.

Tracks 3 & 4 were recorded after a line-up shift that introduced Vince Hunt (formerly of Inca Babies and A Witness) on bass.

It seemed to make more sense to create an EP from these two sessions, and this alleviated the problem of the "Hanging Man" being a bit too long to fit on one side of a 7" 45 without a severe loss of sound quality.

"Skull Jam" felt like a classic 7" garage song - short and to the point, nearly, but not quite, careening out of control.

"Hanging Man" was originally recorded for the debut Blue Orchids album, "The Greatest Hit (Money Mountain)" and has remained a staple of the live set, undergoing several mutations. Chris "Clunk" Connolly's motorik intro renewed the song. This version was recorded in a single take.

"The Devil's Answer" was a UK #4 hit for the somewhat-forgotten Atomic Rooster back in 1971, visited here by the band solely for your entertainment!

"Work Before The Moon Falls" is an oddity. When Martin Bramah left The Fall in 1979, much of "Dragnet" had already been written (he did not receive credit for his notable contributions) and there were several songs that were altered heavily by the band after his departure. Among these was "Before The Moon Falls," which had as its musical backing a tune which later became the basis for The Blue Orchids' "Work." If you know both songs, it's hard to imagine them being the basis for those two very different pieces . . . they don't even share a primary riff in the way that The Buzzcocks' "Lipstick" does with Magazine's "Shot By Both Sides" (which were similarly parts of the same song originally.) So to vaguely demonstrate the connection, Martin and the boys cooked up this new version.

Despite never quite cracking mainstream public consciousness, Blue Orchids endure as a living treasures of head music for post-punks, with a series of deeply-magical recordings. ... more

Bandcamp Daily  your guide to the world of Bandcamp

Nightmares on Wax and Bremer McCoy stop by with their sublime new LPs.